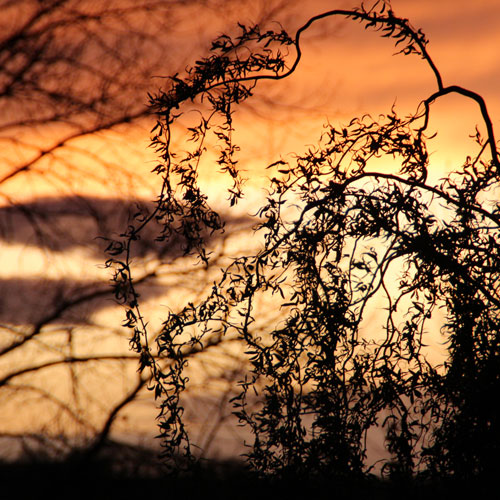 It begins with a juddering of a window being buffeted in the wind, and then we are sucked out into a squall, wind swirling about us. To lock out the gale we slam doors closed, slide bolts on their supports, and latch squeaky shutters. Thunderous impacts alternate with the howling gale in a procession of inside/outside, far/near, dissipation/intensification.

Literally and figuratively "Bourrasques" is an opening. It's a stunning way to commence Matins d'Ariège, a new release by Stéphane Marin. For two years Marin gathered sounds in the village of Fabas, embedded in the Pyrénnées Ariégeoises region of France, using mostly binaural and contact microphones.

The results have been composed into a powerful evocation of place. These seven tracks are compact and efficient, demonstrating a highly tuned ear and a ruthless editing process. We get no tedious, indulgent soundscapes. (Though I also have time for those.) Everything lasts exactly as long as necessary; the emotional force of the composition is amplified as a result.

"Trois averses" knits together the three rain showers of the title, into an expressive aleatoric catalogue. Each drop of liquid activates its environment. Towards the end of the track we hear insect stridulation and car tyres splashing in the puddles, as life on different scales ventures out of its hiding places.

"Bourrasques" then returns, feet crunching through gravel, wind in the trees, gates creaking. But the context is different, and so our reception changes. In contrast to what has gone before, "L'Inquiet" evokes an interior landscape of geological significance, a low pass filter used to creative effect.

The 28 seconds of "Bourre" is no padding, but a reprise of textures from two tracks previous. This insert demonstrates an overt, dramatic, compositional awareness. The artist describes this album as an "intimate, elementary and ecological auscultation of the place I used to live", fairly releasing reviewers such as myself from their descriptive obligations. So I will say nothing about "Brûle la nuit", exept that it is positioned at the end of this curated listening experience, where only it can be.

Through overt technique and careful collation, Marin demonstrates how our own individual interventions in a landscape form that place as a response to our presence. No matter how intimately he knows the locale, Ariège did not come to Marin fully-formed, but as a variety of experiences and constraints that had to be navigated and shaped. With so many naive field recordings being offered up to our ears, it is refreshing to hear one that reflects this phenomenological truth.

Galaverna is a digital music label based in Italy. It promotes an ethos of decrescita or sustainability by releasing only one work per season. If you were going to offer a single album every four months, then Matins d'Ariège would indeed be the one. Highly recommended.